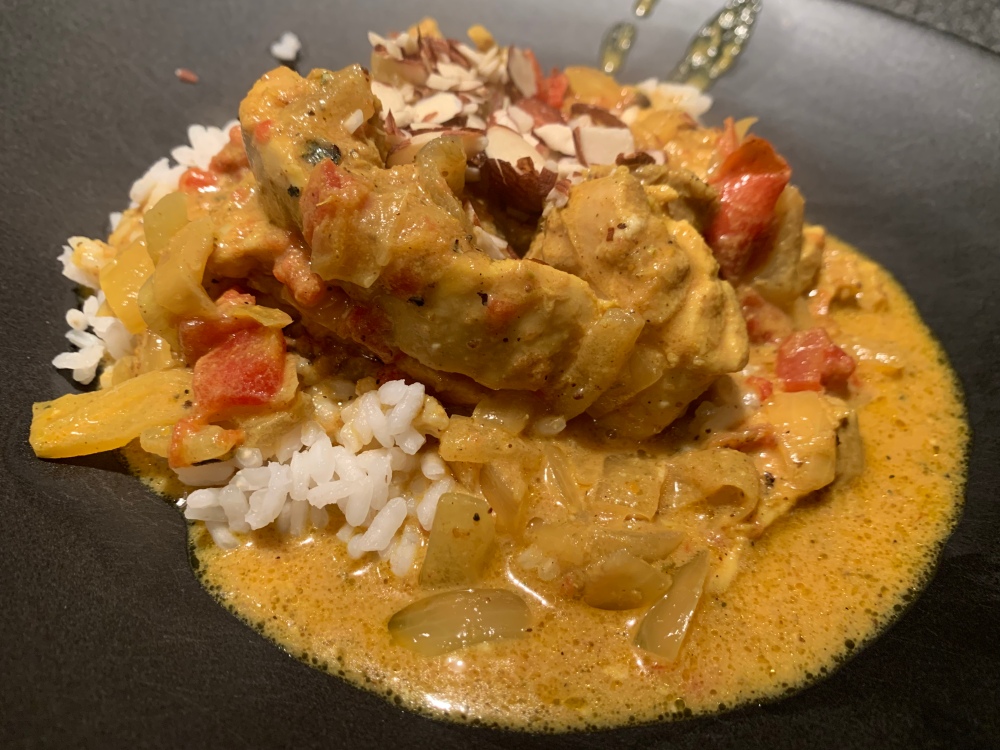 That lovely picture is my was my beau’s dish. I had mine on cauliflower rice because I’m still going strong on my keto experiment. One nice thing about this dish is it accommodates a variety of eating schemes – carbs, no carbs, gluten free, non dairy, super dairy, we’ve got you covered.

I’ve made this dish two ways. By marinating the chicken in yogurt and the speedy dairy free version. Both were fantastic, but I liked the yogurt version best because of the sauce thickness. But it takes longer and requires dairy. I’ll explain both, but the recipe I’ve adapted here is for the yogurt version.

Start by mixing the yogurt, lemon juice, turmeric, garam masala and cumin together. 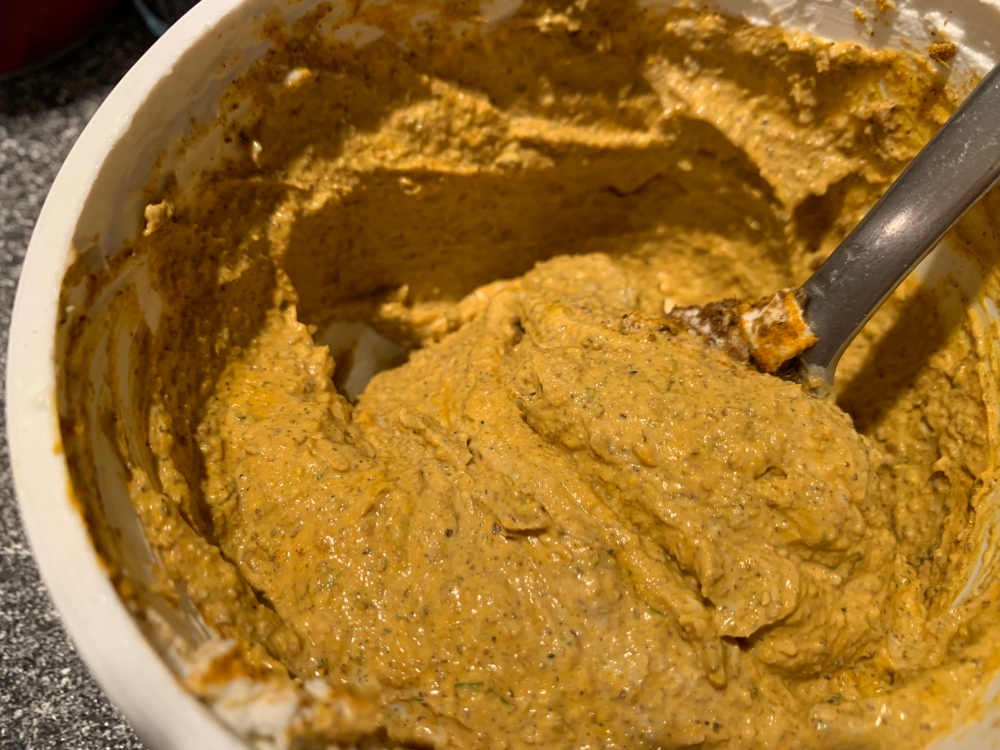 Dice your chicken and add it to the yogurt marinade in a big bowl or ziploc bag. Boneless skinless is easiest and thighs are my preference, but breast is fine too. You can marinate the chicken for up a day. I did this step then tidied up and prepped everything else, which was maybe an hour.

Dice the onion, garlic and grate the ginger. Melt the butter (or coconut oil) and then sauté the onion for a few minutes with the cinnamon stick, then add the garlic and ginger. Add the diced tomatoes to the skillet and a bit of salt and pepper.

Add the marinated chicken and the excess yogurt marinade to the simmering tomato onion mixture. Stir in and simmer for 15 minutes. Add the can of coconut milk and simmer another 10 minutes. Makes sure the chicken is cooked through.

Serve on rice, cauliflower rice, or spinach and if you like garnish with sliced almonds or cilantro or both.

The faster version – skip the yogurt and lemon juice. Sauté the onion mixture with the spices that would have gone in the yogurt. Add the tomatoes, then the chicken, and then the coconut milk. Boom! It’s fast.

I want to try another version with heavy cream soon. I think that must be where the name butter chicken comes from. And maybe I’ll also try puréeing the veg to thicken the sauce.

This is a great keto dish because it’s lower protein and higher fat with minimal net carbs, but it’s also great for anyone anytime because it’s magically delicious.

As for keto, I have gone two weeks with this experiment and I’m still going strong. The best thing about it is that I just feel very zen all the time. I don’t seem to have the ups and downs I am prone to and that is a non scale victory times ten. I think this must be a blood sugar thing. My carbs are mostly all from vegetables and holding steady at 25-30 net carbs a day. Here’s the last week:

I had set my goal for 45, but I just haven’t needed that many. I’m eating about 5 servings of vegetables a day. I sometimes still wonder if I am estimating well enough, but I’m not going to get OCD over some vegetables.

Energy wise, I’m doing good. Keeping up with workouts, waking up early to organize my closet, and have had productive days at work. I do experience the afternoon slump. But I can’t say that’s totally unique to keto and water or coffee seems to help.

I don’t feel noticeably thinner, but the scale shows I’m down a total of 5.8 pounds since January 2. I’m now beyond holiday weight and lower than my normal weight by 2 pounds. In the nonscale victory appearance category, I think I look better. Less puffy eyed and my skin is clearer. Some of my clothes seem to fit better as well. I’m also sleeping very soundly and just feel really calm. I’m not as anxious or as prone to over reaction. I’m looking forward to keeping going with this!