It’s been awhile since I’ve shared anything on the blog. I miss it, but I’ve been hesitant to record what I’ve made here because my cooking hasn’t had much process to it or resulted in much of the way of shareable recipes.

I’m still mostly following a keto diet. I had a week in Mexico in February and then a house guest for a couple of weeks, which made it hard to really track my macros effectively.

But to recap, I followed keto really strictly and cleanly all through January 2019 and lost ten pounds, then mid February went on vacation. I came back 7 pounds heavier – partially a water gain from the flight – and lost all of that in one week of strict clean keto again. Then I had a house guest and we ate out often and traveled around, during that visit I put back on about 4 pounds. Since my house guest left, I’ve been following a more manageable (for me) version of keto and have slowly lost that 4 pounds.

So overall I’m feeling pretty happy. I’ve found something that’s been fairly easy for me to follow, my workouts have gone good, and I’ve basically managed to maintain a ten pound weight loss from January 1 of this year.

I’m planning to keep at this more relaxed version, until I have some time to get really focused and be strict again, because I’d like to lose another ten pounds.

So what is the more manageable version? I’ve always had the goal of 50 total carbs per day, but instead of making sure I’m coming in under that (which meant I often was at more like 30 total), I’m aiming for 50, which means some days it’s been 65 total carbs. But those are days that I did more cardio or the day after I worked hard etc.

There’s a lot of information about ketosis out there and I haven’t been doing tests on myself or anything like that to know if I am really in it. But my main source of information has been Mark’s Daily Apple. According to Sisson, 50 total carbs is a workable number for most active people to achieve ketosis. From my experience, I can say I really felt like I was in ketosis when I was at more like 30, but I feel better at this 50 level and I still seem to be able to lose some weight (although it is slower).

Since I’m pretty close to my goal weight, I’ll choose life. Hitting the 50 carb goal means I can eat a lot more vegetables, some fruit, have wine, or make sandwiches with this fantastic lavash bread. I can have bites of my boyfriend’s almond croissant and feel more comfortable socially. These are wonderful things.

Tracking macros has been pretty eye opening. It’s a much easier way to watch calories because you feel a lot more aware of what KINDS of foods you are eating, so even though it sounds really unbalanced to eat this low carb, I feel a lot more balanced because of my approach. I think I ate very high carb and very high protein and very low fat before. Largely because of fear of fat and misunderstanding about carb levels and meat portions.

It’s interesting to track your carbs and see the difference between berries vs mango or spinach vs brussels sprouts or even some breads vs others. You can choose what form you want your carbs in – treats or whole foods. I generally avoid the keto marketed products in favor of a higher vegetable intake. I also find keto “staples” like coconut or avocado carbier than I would have thought, so I’m not eating as much of those as I did in the beginning.

I’m also weighing out meat portions and finding I was eating twice a much meat as I thought before I started this. A restaurant or grocery store portion of steak can easily have up to three times a real serving. Which makes a huge difference in the amount of protein grams! I try to keep to 130 grams of protein (based on my workouts and lean muscle mass) and my servings about 3-5 ounces, which ranges from 26g to 44g of protein for a boneless skinless chicken breast. I’ve learned there is protein in other foods as well, including vegetables and cheese.

Last, I would not call this a “high fat” diet so much as it’s criticized. In the Mark’s Daily Apple world, the main goals or meet your carb and protein goals and then the rest can be fat, but don’t eat it if you don’t need to, instead let your body burn the fat you’ve got stored on you.

I’ve found it’s more of a don’t be afraid of fat diet. I’m eating cheese and nuts, fattier cuts of meat, using fat to cook other foods, but I’m not looking for fat bombs or anything like that. I’m generally eating about 75 g of fat a day. Which really isn’t outrageous by any means. But it’s lovely to freely put olive oil on my salad and enjoy a good cheese.

So that’s been my experience. I think it’s worth trying. I’ve found it pretty satisfying. The hardest thing is that you’ve got to measure everything. But if you are diligent about it at home, it makes it easier to eat out and guess well.

In January, when I was being really strict and actually losing this weight, I didn’t feel that much thinner or notice as much of a difference in my clothes. But lately, that’s changed. I feel much leaner through my middle. It’s noticeable in my pants or when I bend over. 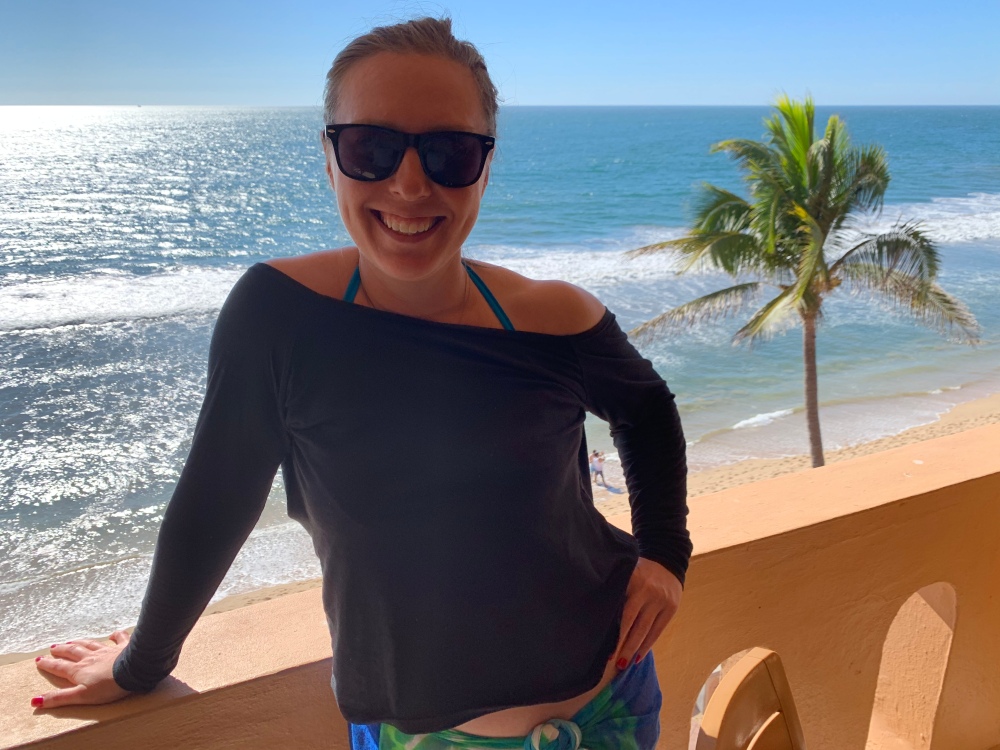 And it feels good.